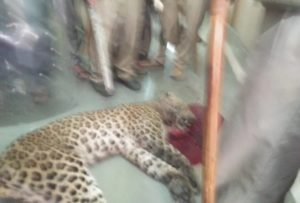 Lokjan Today, Srinagar: Rescuers closed on Tuesday morning at 12.00 pm at Srinagar Medical College in Uttarakhand. Even after two days of waiting, when the Guldar was not imprisoned in the pajad, the search operation was started in college on Tuesday morning. During the search operation, the shooter Joey checked all the buildings in the college with the team. In the meantime, the henchman from the back suddenly attacked the shooter. While defending the attack, the shooter Joey had to shoot at Guldar. Let the forest department plan to safely take out Guldar from captivity or imprison him in the cemetery on Sunday. Chief Conservator of Forests (PCCF) Jayaraj also instructed to take necessary steps after inspecting the college. But he was not imprisoned in cages. 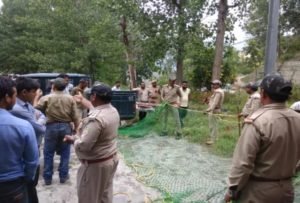 On Sunday, Guldar injured a clerk while entering inside. After that, he disappeared. In the afternoon, he broke the glass gate and injured two security personnel. The team’s team, shooters and police were sitting outside in the waiting room for two nights, but they did not come out. To know whether the swirl turned out or not, the camera trap and footprint were trapped. For this, the plaster of Paris was put in front of the gates. Also, cameras are being installed on the Gates. But when all the arrangements failed, the search operation had to be run on Tuesday morning. Rescue of Guldar from Srinagar Medical College was very difficult. The main building consists of four floors, including ground floor. Each department is connected to each other through the gallery. Halls, rooms and bathrooms are in huge numbers here. In such a case it was difficult to find