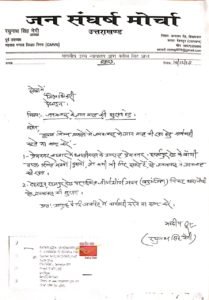 Negi said that due to the complicated standards of Doon Valley Special Sector Development Authority (SADA) / Mussoorie Dehradun Development Authority (MDDA), people are terrorized and many have become victims of depression.
The important fact is that due to stringent standards of authority, the needy poor people spend several rounds of authority with the intention of passing the map to make a small house-building, but its map cannot be approved, without complying with the authorization. The map has to be sanctioned and a notice of sealing/demarcation by the Authority as soon as the construction begins. It is given.

Negi said that it should be that the authority should apply its rules only to the newly developed colonies, malls, complexes, but in the past, relaxation should be given to these standards on redevelopment / new construction of buildings, shops built in the street.

Very important and noteworthy is that the person constructing a building under the authority area wants to deposit the prescribed departmental fee by passing the map for the purpose of avoiding this tragedy, but then it has to be two to four from the same standards. Due to the complication of standards, only 10-15% of the maps are approved, due to which the government has a loss of revenue of crores rupees. The employees of the Authority take advantage of these stringent standards.

Discussing the morcha, he said that without permission, Stone Crusher Screening Plant can be opened under the authority area, but a small house/shop cannot be made. The delegation included Front General Secretary Akash Pawar, Sushil Bhardwaj, etc.