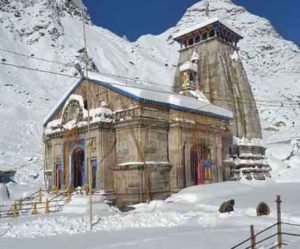 Lokjan Today, Rudraprayag: There are few days left to start the Chardham Dham Yatra. The process of opening the cupboard of Kedarnath Dham will start on Sunday with the worship of Bhairavnath in the winter gadasthal Omkareshwar temple, Joshimath. The Kedarnath Dham ka kapat is to be opened on May 9. People are very excited about the journey. The process of Kedarnath Yatra will begin duly with Bhavnath Poojan on Sunday evening in Omkareshwar temple. Bhairavnath has been considered as the field guard of Baba Kedar in public beliefs. After Bhairavnath Pooja, Bhairavnath leaves for Kedarpuri. On May 6, between the band tunes, Baba Kedar’s Panchgani Vila Vigya Utsav will leave for Kedarpuri from Doli Ukhimath. Q

After visiting the devotees on many pilgrimages including the Jabri, Vidyapeeth, Vishwanath temple Guptakashi, Nala, Narayan Kothi, Makhanda on the Tham Day, Doli will reach Phata for the night stay. On May 7, Doli will be resting the night in Gaurikund, in the Gautama temple, Sarsipi, Bulusu, Rampur, Sitapur, Sonprayag. On May 8, Doli will reach Kedarpuri by Gaurikund, through Jangalchatti, Bhimbali, and Lyncholi and reach the reservoir. On 9th May morning, the doors of the Dham will be opened at 5.00 a.m.

Once the main stop of Kedarnath Yatra, Garudchatti will now be re-populated. From Kedarnath to Garudchatti, it is three and a half kilometers wide and four meters wide. Since the disaster in 2013, this Chitta is deserted. Prime Minister Narendra Modi also practiced a cave here in 1985-86. In October 2017, the Prime Minister, who reached the shilanyas of reconstruction work in Kedarnath, also expressed his desire to live up to this clay. The reconstruction of Kedarnath Dham is one of the priorities of Prime Minister Narendra Modi. The Prime Minister’s Office also periodically reports on the progress of reconstruction work. Before the disaster, the pedestrian passage from Gaurikund to Kedarnath used to pass through Rambara and Garudchatti, but the rising waves of the Mandakini river ended the existence of Rambada, and along with this the road also got a gift of destruction. The way of travel changed from 2014. After this, it became dry. In the year 2017, the Kedarnath reconstruction work was caught, then the practice of grooming Garruchatti also started. The route was prepared in October 2018. Mangesh Ghildiyal, District Magistrate of Rudraprayag, said that 17 crore rupees have been spent on the construction of this route. More than 1,000 horse-mule and two hundred pistils have been registered in the Kedarnath yatra. It was registered by camping at different places from the District Panchayat and Animal Husbandry Department. This work will be done in the registration centers located at Sonprayag and Gaurikund from Saturdays.

Kedarnath Yatra is starting from May 9. In view of this, the district panchayat has created registration centers for horse-mule and dundi-Kandi in Sonprayag and Gaurikund. District collector of the District Panchayat BS Negi told that on the basis of the medical certificate of more than one thousand horses and mules till now, by imposing camps in Manasuna, Raunelank, Kalimath, Jal Talla and Malla, Shalya Tulga, Banos and all under Ukhimath block. Has been registered on. Apart from this, 200 Dundee-Kandi owners were also registered after police verification. 250 pounds of horse-mule and dundi-Kandi license fees were taken by the district panchayat. However, the concerned animal owner and the laborers got 36 rupee insurance premium and Rs 204 token fee. There are now only three days left in the opening of the gate of Gangotri Dham and this will also start the Char Dham Yatra. Despite this, its travel preparations are still teasing. Under the circumstance, during the visit of Gangotri Dham, passengers will have to be twice aspirant from the road to ghat till all the misfortunes.

Due to the construction of the Allender Road; From Sikhs to Uttarkashi, the Gangotri highway is not only going to raise dust, but also the places are also potholes. Apart from this, neither ghats have been built in Gangotri Dham and any effective steps have been taken to tackle the problem of health, communication, and jam. However, the administration is claiming to be chalked up on May 7 before the opening of Dham’s cupboard.

In Gangotri Dham, thousands of people daily dip on a km-long river of Bhagirathi (Ganga) river. In this context, security arrangements are also made with the construction of ghats in Gangotri during every travel season. But, this time, there are neither ghat nor any security arrangements have been made in Gangotri. The work that has been done is only for Khachapuri. However, during the past three years, eight passengers have flown in Gangotri Dham during the bath. Obviously, bathing in Bhagirathi without any security arrangements is not empty. According to the administration, this budget could not be reached due to the code of conduct for the construction of the ghat this time. District Disaster Management Officer Devendra Patwal points out that there will be a deployment of SDRF and security personnel on Ghats in Gangotri. Also, travelers will be warned of dangers too.

From Rishikesh to Uttarkashi, on the Gangotri highway, the work of Allover Road is completely incomplete. Where the works of widening etc. were done on the highway, the road was not fully concretized. If the weather is clear then passengers will have to struggle with dust and potholes in this route. Whereas, in the rains, mud and swamps will be difficult.
Most mobile companies in the country’s corners are running with the speed of 4G. Mobile