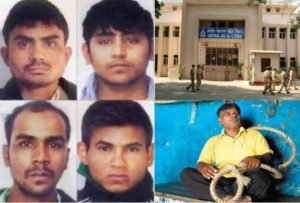 LokJan Today: The mercy petition of Pawan Kumar Gupta, one among Nirbhaya’s poor, was rejected by President Ram Nath Kovind on Wednesday. This information was given by a politician of the Ministry of Home Affairs. With this, all the choices of the four poor men Pawan Gupta, Akshay Thakur, Vinay Sharma and Mukesh Singh are over.

Due to the pending mercy petition of Pawan, the hanging of the poor people on March 3 was postponed. At an equivalent time, with the dismissal of Pawan’s petition, the Tihar Jail administration applied for a replacement date of hanging within the Patiala House Court. it’ll be heard today.

Meanwhile, advocate Seema Kushwaha, on behalf of the family of Nirbhaya, said that she goes to file an appeal seeking the new date of the hanging of the four convicts. He said, all the culprits have exercised all their legal rights. Now the date is going to be fixed, it’ll be the last date.

However, Akshay has also sent a replacement mercy petition to the President, arguing that there have been not enough facts within the first mercy petition. At an equivalent time, the corrective petition was already rejected by the Supreme Court in Pawan’s case on Monday. After this, Pawan had only the choice of mercy petition. consistent with the principles, even after the mercy petition is dismissed, the convict gets 14 days before hanging him. Earlier, the hanging of the culprits was postponed thrice on January 22, February 1 and March 3.

The guilty will need to answer today, the judge said that they can’t ignore the opposite side

Meanwhile, the Delhi government moved Tis Hazari Court on Wednesday. The Delhi government told Judge Dharmendra Rana’s court that after Pawan’s mercy petition was rejected by the President, all the choices of the culprits were over.

On this, Judge Rana has issued a notice to the convicts to offer their reply on Thursday. Judge Rana said the principle of natural justice is under Article 21 (Right to Life and private Freedom) of the Constitution. In such a situation, the opposite side can’t be ignored.

The mental condition of the convicts should be investigated, the petition dismissed

Meanwhile, the Delhi supreme court was petitioned to direct the National Human Rights Commission to research the mental and physical health of the convicts. A bench of judge DN Patel and Justice C Harishankar refused to listen to it, saying the petition had no merit during this argument. It should first be taken to the commission. The petition was given by A. Rajarajan on Saturday.

Nirbhaya’s father said it’s expected that the poor are going to be hanged this month. After Pawan’s mercy petition was rejected, Nirbhaya’s father said, now everyone’s options are over. let’s examine what subsequent step will be? But I’m sure that justice will close. We hope that the culprits are going to be hanged this month and can get justice after expecting an extended time.

Nirbhaya’s mother said that I will be able to be content only I’m hanged
Many because of President Ramnath Kovind for rejecting Pawan’s mercy petition. But, I will be able to get satisfaction only the culprits are hanged. Now the culprits have tried all the legal options and therefore the new warrant is going to be final. there’ll be no hindrance within the way of hanging the culprits.