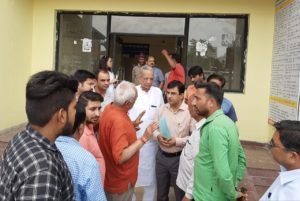 Lokjan Today, RishikeshThere is a growing problem of people from the Hiralal road and the smoke from the fire in the garbage pile in the vicinity. Local citizens and members of the business board have demanded action in this direction from the chief city commissioner. It is known that the waste of the city area is thrown on the huge plot located at Hira Lal Marg. Large piles have been taken here. Due to burning fire in the sun, day and night it keeps smothering. Due to the smoke the surrounding population is upset. Under the leadership of Rajkumar Agarwal, a former member of the Godland Uttaranchal Industry Trade Board, Harish Anand, the citizens met Chief Commissioner Commissioner Chatar Singh Chauhan and apprised him of the problem. The traders also had to say that the cars carrying rubbish every day are not coming regularly. When the vehicle is still there, it does not have helpers. The women and children present in the house are asked to come out on the road and put garbage in the car. Because of which there is litter The problem is not being solved. The city commissioner assured the immediate action in this matter. In the delegation, Parshad Prabhakar Sharma, Krishna Mohan Chaurasia, Ved Prakash Dhingra, Ajay Das, Sher Singh Thakur, Vaibhav Goyal etc. were included.