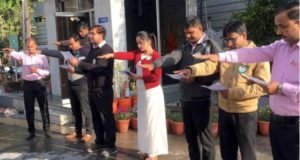 LokJan Today: The impact of the corona virus spreading in China has started appearing in Selakui’s pharma industry also . thanks to Corona, the Central Government has prohibited the import of certain active pharmaceutical ingredients (APIs) and formulations. thanks to this, industrial units are having to import the above medicines at expensive prices from other countries. thanks to this, pharmaceutical companies have had to lose crores of rupees last month.

The speakers spoke at an occasion organized under the National Security Week at the East African (India) Overseas Company located in Selakui Industry Area. During the program, company employees took a pledge of safety and health also as environmental protection. Jitendra Kumar, president of the Selakui Pharma Industry Welfare Association and plant head of the corporate, said that about 14 per cent of the pharmaceutical ingredients within the pharma industry were imported from China, but thanks to the coronavirus it’s been adversely affected. He said that the govt has also banned the export of medicine. If concrete steps aren’t taken soon, the pharma industry will come to the surface. He said that diseases make the economy of the state rare.