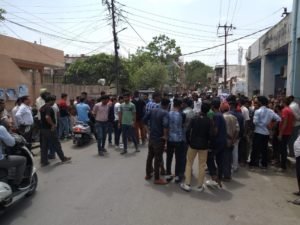 Lokjan Today, Rishikesh: On the Hiralal road, a scooter rider came under the truck while overtaking the truck near Shanti Nagar, which resulted in his death on the spot.
According to the information, on Wednesday afternoon at around 12:00 a young man was going towards Parshuram Chowk while on his bike; via the Shikesh Hiralal road. Near Peepal tree in Shanti Nagar, he wanted to overtake the truck running forward. In the meantime a scooter came from the front which saved the young man untimely and came under the truck’s rear tire. He died on the spot. The police has sent the dead body to the post-mortem. At present the identity of the young man has not been identified. The police is trying to identify her on the basis of her mobile.