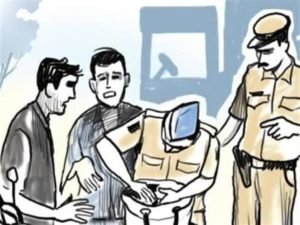 Lokjn Today, Haridwar: A team of STF has arrested a vicious crook Jhabreda and Mangalore route. He also has pistols and cartridges in his possession. The STF claims that he was in touch with a scoundrel locked in Rishanabad jail and was about to kill anyone.
According to STF Inspector-General of Police Ridim Agrawal, one of his team deployed at Haridwar got the input about his companion waiting in jail in Roshnabad jail. The team arrested a suspect with tambourines and cartridges on Wednesday from Zhabrera Mangalore road. In the inquiry, he named his name Kapil alias Ashu son Baburam resident village Hakimpura police station Charathawal Muzaffarnagar Uttar Pradesh. It was revealed in the investigation that Kapil was locked in Haridwar jail for gangster and theft cases from 2016 to 2019. He had been waiting in jail for a while, and he had been entrusted with the task of destroying one of his enemies at the same time. STF claims that the he had arranged for Kapil’s pistols and cartridges for it. At the same time, he promised to pay a considerable amount of money. STF’s Inspector General of Police Ridim Agarwal told that half a dozen stolen robbery cases were registered against Kapil in Haridwar police station. Inquiry ongoing