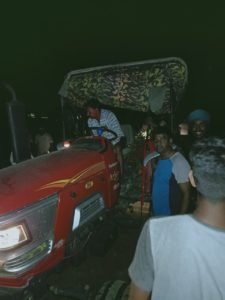 Elephants knocked on the empty plains equal to the Sonia Hotel on the Rampur road of Rudrapur, and all elephants stood up, with elephants damaged by elephants, elephants made a lot of effort to go to the Nainital Delhi Highway, but departmental and local people gave them elephants Did not succeed.

To lead the same team, the senior officers of the forest department, including SP Devendra Picha, SP Crime Pramod Kumar, Rudrapur Kotwal Kailash Bhatt, were on the spot,

The same person was crushed by elephants in the same area as the Sonia Hotel, and drove down to the ghat of death’s death,

But the forest department, police and local people courageously took up the night at 4 pm and took the horse from the Rudrapur population to the forest of UP,

From where Hathio has crushed a young man in the Swargaphuf in Bilaspur in UP and stirred the area.