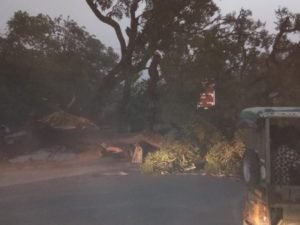 Lokjan Today: Tanuj Walia: Rudki In Dada Jalalpur village of Bhagwanpur area, a farmer died after being buried under a seminal tree. The incident took place on Thursday evening, due to a strong thunderstorm, Seemal tree fell on the farmer. After the incident, the police reached the spot and got information about the case.

Farman (50) son Shabbir is a farmer of Dada Jalalpur village in Bhagwanpura area. On Thursday evening, the farm went to the farmland to cut wheat. During this time a sharp thunderstorm went on late at 7 o’clock. Meanwhile, a pebbled tree standing in the farm fell on the farmer. Whose death caused him to be buried under pressure When the farmer did not reach the house, the family came to the farm looking for him.

The farm man got pressed under the tree. The family took her out of the tree, but by then she had died. The incident was reported to the police. The police reached the spot and took information about the case. Farman’s body took to Kashin village. Bhagwanpur police station in-charge Sanjeev Thapaliyal said that the farmer’s death has been caused by submerging under the Semel tree. The postmortem of the body will be done.